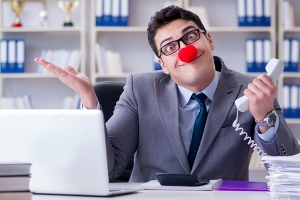 Not only are funny people smart, they’re nice to be around. Evidence suggests that having a good sense of humor is linked to a high EQ (emotional intelligence) and is a highly desirable quality in a partner. Evolutionary psychologists describe humor as a “heritable trait” that signals mental fitness and intellectual agility to prospective mates. In studies of attractiveness, both men and women rate funny people as more attractive, and cite having a good sense of humor as being one of the most important traits in a long-term partner.

Turns out, our clients and co-workers enjoy it and are attracted to it as well.

I’ve had many favorite necklaces in my life, but none have rivaled my bright, shiny red, sliced agate necklace on a simple gold chain with thin leather tassels (similar but even prettier than the one in this picture.) I racked more compliments with that one piece of jewelry than anything I’ve ever worn. It was totally unique, versatile, and elegantly beautiful. I wore it at least once a week for years. Until yesterday.

I never felt it come off or break but as I was getting ready for bed… I realized it was gone. Tom and I had just left the cabin after closing it for the season. We had a long 10 hour drive back to Southern California and typically we break it up by staying at a lovely bed and breakfast about halfway home in Bishop, CA.

At first, I thought it might be in the car. Nope. I checked my purse, the hotel room, and the parking lot and grounds in between. Nothing. As we had left the cabin, we had stopped to enjoy the beauties of the Sierras one last time for dinner at a quaint little mountain resort on our way out called Sorrensons. Maybe it was there?

In the morning, I called and an older sounding gentleman answered.

“Thank you for calling Sorrenson’s Resort. I’m just finishing up with a customer. Would you be able to hold?”

“Great! I don’t have any on-hold music so… just sing yourself a song and I’ll be right back with you.”

I don’t know why but it tickled me… and delighted me. Something so simple. A small bit of jovial humor but it was charming. I was on hold for a couple of minutes which can feel like an eternity to a caller. But, the gentleman’s playful remark left me feeling like I had not only agreed to the extended hold time but also to the silence (in which I quickly found myself singing Take Me Out to the Ballgame because I had just seen a friend post it on Facebook a moment before.)

When he returned, he was empathetic, kind, and helpful even though no one had found it. When I described the table at which we had dined and mentioned that I had visited the restroom, he said, “Oh, well… our toilet was clogged this morning so if that was the culprit, I’ll not charge you for the damages.” Another chuckle. Of course, he promised to look for it and put the word out among his staff. He took my name and number and promised to call me either way.

After I hung up, I was struck by a thought. At LionSpeak, we teach and coach teams on their professional verbal skills including telephone skills. We teach a 4-step method of un-scripted but well-crafted skills for managing and converting all kinds of new clients and patients. We take on challenging callers such as price-shoppers, insurance questions, potential cancellations, and demanding clients. We include basic telephone etiquette, on-hold remedies, and even outgoing calls. We have a fantastically supportive mystery shopper call program. I think we have a truly complete package.

And yet, I was reminded of something that I’ve known but often forget to teach… the power of appropriate playfulness and good humor. It takes the average call and makes it delightful. It heals. It bridges the gap. It portrays intelligence and even a degree of control. Professionals who are stressed or feeling like things are spinning out-of-control generally don’t joke around or have a sense of humor.

Of course, all professional humor must be appropriate and in good taste. It cannot have a passive-aggressive edge and it cannot be at someone else’s expense. However, when used correctly, it’s an under-utilized tool that many professionals, speakers, and leaders overlook.

This week lighten up. Discuss with your team where and how you could use humor more in your interactions with clients as well as each other. Use it to set you apart as a communicator. And, don’t forget… it will make you look really smart and attractive!

“Good humor is a tonic for mind and body. It is the best antidote for anxiety
and depression.  It is a business asset. It attracts and keeps friends.
It lightens human burdens.  It is the direct route to serenity and contentment.”
~~Grenville Kleiser

This entry was posted in Uncategorized. Bookmark the permalink.